If you have diabetes you are at risk for getting a foot ulcer. These can be devastating. In general, the incidence of non-traumatic lower extremity amputations has been reported to be at least 15 times greater in those with diabetes than with any other concomitant medical illness. Nearly all of these are caused by chronic foot ulcers or infections caused by foot ulcers. It has been reported that annually, about 1 to 4% of those with diabetes develop a foot ulcer,10 to 15 percent of those with diabetes will have at least one foot ulcer during their lifetime. The annual mortality (death) rate for Medicare Parts A and B fee-for-service beneficiaries with diabetes who have an incident diabetic foot ulcer is about 11%. For those with an incident lower extremity amputation, about 22%. The life expectancy of a person who has an amputation from diabetic foot wound is about ½ the life expectancy of a person diagnosed with breast cancer. 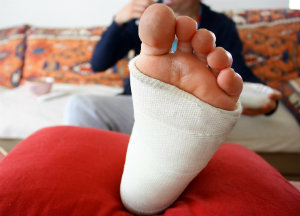 There are three things that cause diabetic foot ulcers: Numbness, pressure or friction, and poor circulation.

Numbness: One of the bad things about diabetes is that elevated blood sugar attacks the nerves. This can feel like everything from tingling, burning, electrical sensations to numbness (see my article on Neuropathy). This results in the patient being unable to protect the feet because they don’t feel when they are being injured. The most common ulcer I see is one that is under a callus. The patient does not feel the callus buildup and then the skin breaks down underneath. The callus keeps it covered and the patient does not even know they have a hole in their foot.

Pressure or friction: This is can be caused by many things. One can be bad shoes. Pressure can also be caused by a deformity. Hammertoes, bunions, and muscle contractures that put extra pressure on the feet in certain spots are all potential causes. If you have a callus on your foot and are diabetic, the callus is a place you have to watch very carefully. You should show it to your doctor or podiatrist and get help with it.

Poor circulation: This is not as common as most people think. Only about one in three ulcers is caused by bad circulation. But it can be a contributing factor. Most of the diabetic patients I see have sufficient blood flow to heal given the chance. If you’ve had or have an ulcer you should get your circulation checked. We do vascular testing in our office on most of our diabetic patients.

There are hundreds of wound care products on the market.They range from hydrogels to collagen to silver impregnated materials and skin substitutes and growth factors. It is a science in and of itself studying foot ulcer treatments.

But I like to keep it simple. There are straightforward solutions for healing up foot ulcers, depending on the root cause of the ulcer.

Neuropathy: If some of the nerve function can be restored, then the patient can protect themselves from further foot ulcers.

Pressure or Friction: I like to tell my patients: “It doesn’t matter so much what you put on an ulcer, it’s what you take off it that matters.” If you can eliminate the pressure or friction and just provide good local wound care the ulcers usually heel. There are many tricks to doing this. We use casts, shoe modifications, healing boots, and even surgery to off load pressure points.

Poor circulation: If needed, we refer patients to vascular specialists to help restore blood flow to the leg. This is not always possible but is a game changer if it is possible.

Of course other factors play a role in successful outcomes including blood sugar control, smoking cessation, infection control, and nutrition.

If your wound has not progressed in the phases of healing in four weeks, it may be time to consider an advanced treatment such as EpiFix.  EpiFix is a skin substitute product that helps your own cells regenerate the damaged tissue, controls inflammation, and reduces scar tissue formation. Learn more about EpiFix Treatment.

What Do I Do if I Have A Foot Ulcer?

The first thing I would do is find a skilled podiatrist who can address all these factors. If you have had an ulcer for a long time and are just not getting anywhere, get another opinion. If no effort has been made to get pressure off your wound then get another doctor. I have seen patients who were treated for months with very expensive topical treatments and nothing was done to offload the area. If pressure is not addressed, all other treatments are usually doomed to fail. That goes for after the wound heals as well. If you have had an ulcer and no change is made in the pressure point, then your likelihood of getting another ulcer is 32 times greater than for a diabetic who has not had an ulcer.

Please complete the form below and we will be in touch with you within 1 business day.